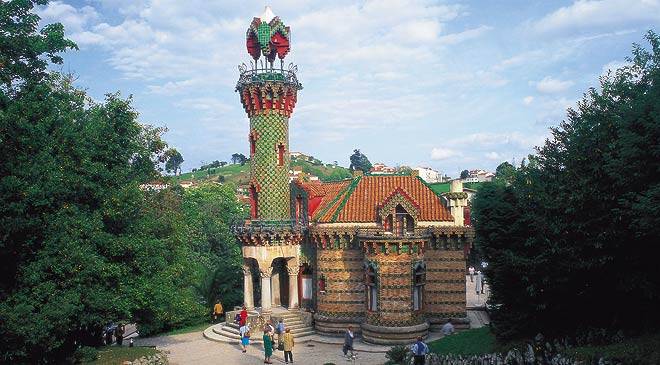 Our trip will start at Comillas, the archbishops’ villa, the nickname the town has inherited from the old times. Relatively small town has so many pearls of architecture that it could compete with many other European cities in its tourist attractiveness. One of the jewels of Comillas is the catholic university with its finery which used to be the biggest one in the Spanish world until the year of 1967.

The next spot is Palacio Sobreliano, the one that always reminds us of the fairy tale palaces inhabited by elves and fairies. The narrow streets of Comillas, habitual to the Cantabrian style of the settlements over the hills, will bring us through the history of the town. Another place to discover in Comillas is its gothic cathedral of San Cristobal. For the dessert of our tour in Comillas we offer Cappricio de Gaudi, one of the jewels in the collection of the renowned Catalan architect. The last but not the least is a famous cemetery of Comillas with the statue of the Angel the Warrior, often suggested to be an emblematic symbol of the town.

Next, we stop for the lunch at a traditional Cantabrian restaurant and after that, we follow the coastline to San Vicente de la Barquera. It could be truly called the most picturesque town of Cantabria. Due to its numerous monumental spots dating from the roman époque, the gothic style in its blossom, the Renaissance, and the royal spots of the 18th century, San Vicente de la Barquera is declared the town of the national interest of Spain. Thus, the famous cuisine of the town would be a pleasant bonus to our journey.

After the lunch we head to Santillana del Mar, the town where the history is stunt in the old times. We are going to visit the Altamira cave, part of the Unesco world heritage list. The greatest collection of the Stone Age pictures drawn in a unique technique is preserved here. After that we’ll take a lazy walk through the streets of Santillana, which hasn’t changed a lot for the last 300-400 years. The natives of Santillana, proud of their ancestry are heartily willing to share the history of their native land, would it be a visit to artisanal workshop or traditional cidreria-bar.